Start of the weekend with a great night in one of if not the best comedy club in Scotland.

With the arrival of Jongleurs in Edinburgh the city has started to take comedy seriously with the booking of fantastic acts to boost its already great reputation. 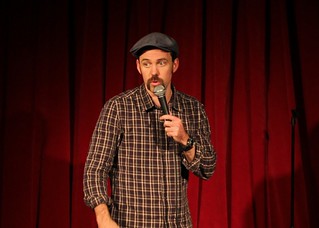 Can there be a better night time activity for stags than the Comedy club…..NO.

Everybody loves to laugh and joke and it gets the weekend of to an amazing start, especially since there is an option to get the stag involved in the act, go on I dare you.

Where are the Comedy Club's?

There are two clubs that we use both in the city centre walking distance from most hotel and if you are lazy a couple of £ in a taxi.

The comedy clubs are located next to some great night spots so if it is pre drink or after drink you are looking for you have lots of options.

Included in the night at the comedy club is a meal and also free entry into an adjacent Nightclub so you can rock the night away after your hours of fun.

Why we Recommend the Comedy Club

The main reason is that it is such a good way to start the weekend.

You will laugh your head off.

You all stick together for the first night at least.

You will probably have to pay a bond if you are a large group which you will get back if you're not too disruptive.

How to Plan Your Party

Your browser sent a request that this server could not understand.